Streaming Videos may take a minute to load...be patient...we promise it's worth it!

Thematically, this show wrestles with deep issue of the sub and super-consciousness. We created a sex positive environment to explore the absurd, grotesque and dreamlike aspects of our fantasy, obsessions, spirituality and sexuality!

The show started off showing the distractions that arise when we simply try to sit and observe the breath. “Meditative Mind” by the entire ensemble.

In Animal Sex, Joy shows us how the shamelessness of animal sex can teach us how to be more present in our own bodies.

Shit Talk – Adam brings his unique stand up style to a light-hearted comedy illuminating the taboo subject of shit. On a deeper level, those things we consider filthy may have a message for us.

Hysteria is an improvisational period piece about how early vibrators were used to relieve women of their excess emotions. Thank you: Rita, Michael McClure & Shawn Roop.

In Siren Song , Heidi GoodieGoddess embodies courage and self-love as she performs an original personal narrative to heal her body image. This break-through piece starts off with “Ever notice there aren’t any old, fat, ugly Mermaids?” Then she vulnerably sings naked in a cappella! (video not avail)

Death Doula – AmRita created a personal narrative about her mother, death and dying, though she is still here. Using her own unique authentic expression, she shows how death is a beautiful cycle of life.

Liberation through Bondage – performed by Roxanne DePalma, written and directed by Kamala Devi. In this powerful re-enactment, Roxanne uses rope to show the healing side of being kinky.

Ripped– Conceived by Shawn Roop. Performed by Shawn Roop & Jennifer Gold. This dance piece uses a medly of Beatles music to express the frustration of when love and passion was just not enough to wake someone out of their dull lifeless form, until they are left feeling the pain of what they lost. 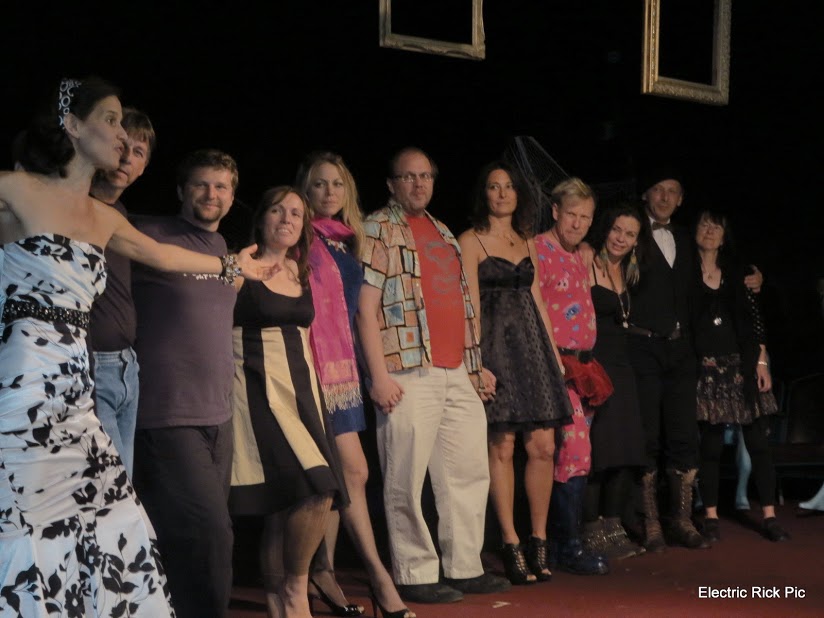 During the INTERMISSION we thanked the Crew and Past Tantra Theater Players. Kamala Devi wants to give an extra special THANK YOU to Coby Anderson for stage managing the show. This was a HUGE labor of love and we hope to continue to work together in future shows, unless, of course he is performing 😉

Fantasty Festival is an exploration by the entire ensemble of all our nasty little fantasies. Shawn Roop played an evil ringmaster as he recited a dramatic interpretation of Oingo boingo’s lyrics: Nasty Habits.

Sex with a Cenataur -Jennifer Gold is running through the forest and is forcibly (but pleasurably) raped by a pack of Centaurs.

Train to Berlin – Joy and Adam are anonymous strangers who mutually pleasure themselves before making love on a train in Germany.

Lesbian Love – Katie Holton makes a powerful declaration onstage about how fullfilling it is to finally be living her fantasy!

Strip ON _ Roxanne DePalma – Does a burlesque style dance to Marvin Gay’s “Lets Get It On” She uses baggy clothes, pillows, wig, and mustache to show that inside every larger man lives an inner vixen. A playful dance of transformation from one version of beauty to another.

Too Good to Be True – Michael McClure plays the narcissistic French lounge singer, Pierre Jackass as he spoofs “Can’t Take My Eyes Off You” by Franki Valli and the 4 Seasons!Thank you Rita, Joy, Roxanne, Jennifer and Heidi for doing the Can-Can…on their backs!

Yoni Gaze – Written and performed by Shawn Roop, performed by Joy. In this powerful personal narrative, Shawn tells the story of the various stages of consciousness he experienced during an 8 hour meditation of staring at an anonymous woman’s vagina.

Final Dream – The Tantra Theater Players humorously re-enact several dreams that were co-created during their 4am dream Theater. This piece includes Michael’s questioning if all religions aren’t just urban legends, and Rita’s re-occuring feeling that she is somehow responsible for everyone’s death.

And the show ended with some improvisational play-back theater where we re-enacted dreams from the audience! Afterwards we had a deep Q&A and Shawn Roop was presented with the prestigious Golden Lingam award for his dedication and vision througout the Surreal Show! 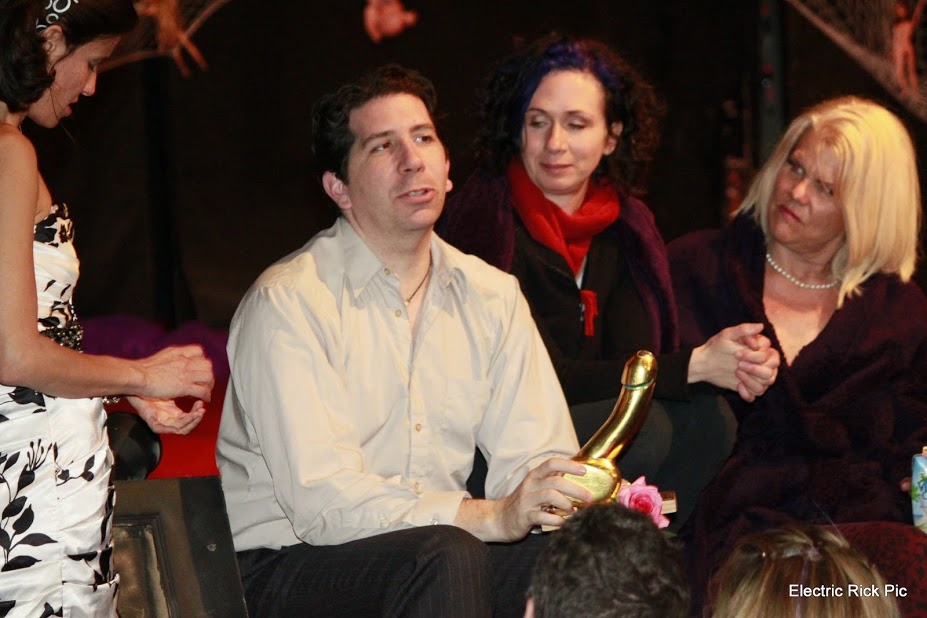 The Mission of Tantra Theater is to transmute

into Art, Healing and Liberation! 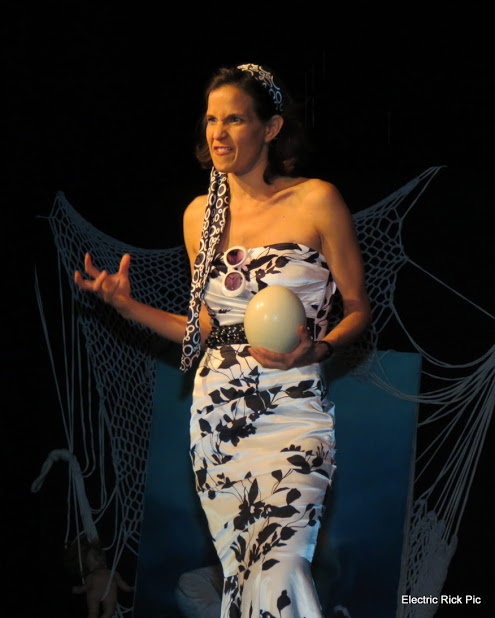 This audacious experiment was birthed after an insanely focused 7day
rehearsal process that actually involved a co-ed sleep-over with a 4am
“wake up call” so the performers could perform while still dreaming.
And though we enjoyed mixing beaker in the laboratory, we had no
idea how the results would turn out…until we heard the absolute
AWE reflected back from the audience of over 200 people when
it was performed on Feb. 1& 2, 2013 at the Victory Theater,
Downtown San Diego.

Dear Kamala Devi, I was curious about it… and This is my first time in a Tantra theater and i did not know what to expect when I arrived, I sat in the second row and a very nice man introduce himself and then a woman and when I realize every one in the theather were full of friendship love … Every one on my way were smiling back at me… The performance of the actors were originally great! I laugh with the dog and shit scene, I cried with the dying mom …. and the lonely people walking with broken hearts that Shawn Roop beautifully Performed remind me how there is so many lonely souls with broken hearts walking surviving instead of living , the women mermaid scene was liberating how she describe her belly and breast imperfection that gave life to 4 children and 7 grand children and the rest of the scenes were very sexy, scary the nasty fantasies … I appreciate a lot the originality way of saying everyday life topics that some way are taboo in a comic and healing way… the improvisations were surprisingly originals an comic I loved the group meditation as well … was awesome…! I just want to say thank you for your direction of this beautiful actor souls helping me to see life less serious and less personal and entertain me in a very funny an original way… I am so grateful for the experience thank you. –Karina Ramirez 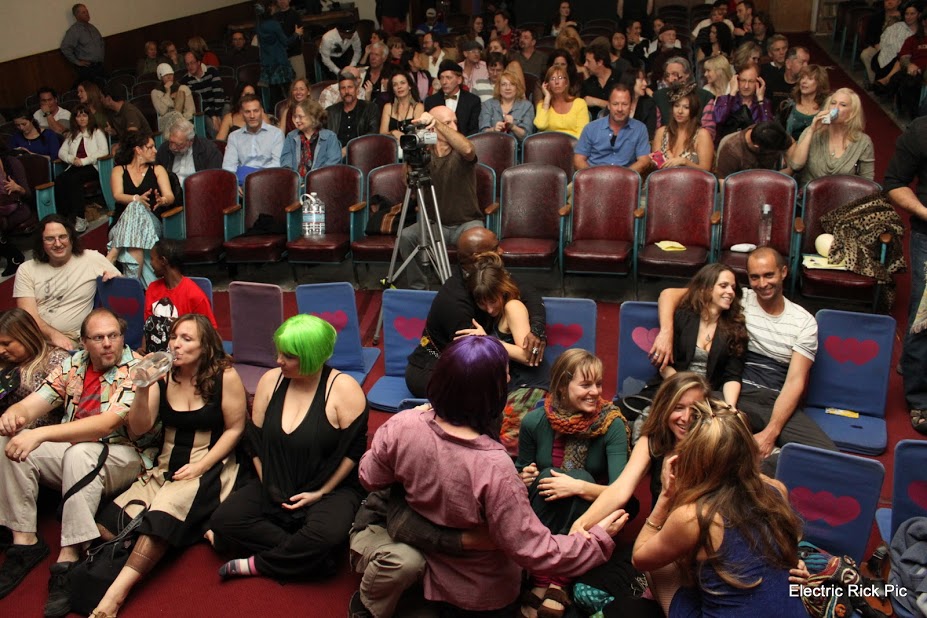 “Tantra Theater was magnificent tonight! Thank you Kamala Devi for your vision! In your deepest vulnerability, your delicious humor, your willingness to put YOU on the stage we all get the chance put ourselves on the line and take the journey with you. I left with even more questions and a new path/opening for healing where I have been stuck, and I love watching that opening/light come on in people’s eye’s after a RAW Tantra theater show. I love you, each and every one, am proud to know you, am grateful for each opportunity to peak behind YOUR curtain….. and thus the collective’s curtain as well. PS If anyone is thinking of going to a performance, don’t hesitate, it something you will remember and be shifting from for the rest of your life. ♥ ♥ ♥–Anya Shekina

Tantra Theater weaves entertainment and enlightenment together effortlessly with its focus on vulnerable personal narratives and hilarious improv that attack nearly every taboo in the book. The Surreal Show in particular, revealed Kamala Devi’s masterful directing skill. She delivered a lyrical continuity to a show that somehow made sense of surreal fantasies and sexual obsessions. She also pulled together a top notch cast whose acting and improv skills rival the best. It’s a rare event to see this much creativity and passion on stage! Even more of a treat, is that Kamala Devi stepped into the roles of writer and performer. This show featured one of her scripts “Liberation through Bondage” and some pitch perfect improv play. –Keli Lalita

All the performance pieces were great! Not to slight any other pieces, but Heidi’s mermaid piece was the standout for deep, raw and personal. This was probably the best Q&A afterwards of any Tantra Theater evening I’ve attended, to illuminate some more behind some of the pieces, Shawn’s piece in particular. Thanks for your time and brilliant work to drive this production to stage, Kamala Devi. –Neal White And once again, Kamala and the Tantra Theater crew created a magical show that was entertaining, hilarious, touching and healing on so many levels. Each piece touched me deeply; however, the two acts that stood out for me were “All the Lonely People” & the piece where Jen slowly ripped Shaun’s heart out… Absolutely profound and brilliant! –Tracy Jordan Wells

Scroll back to top