Who is Annie Sprinkle? 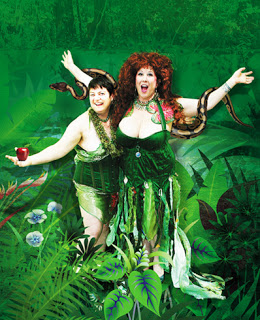 And The Golden Lingam goes to... 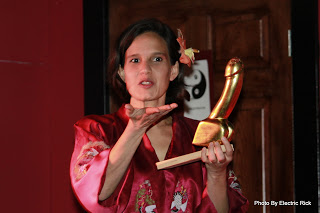 During each show, there is at least one player who shows up big. I mean really, really big. Someone who is pregnant with ideas, time and energy to contribute to the ensemble and the entire production. This is someone who is unconditionally supportive of everyone else, who handles their own work load and goes way beyond the call of duty to make the show a shimmering success. In many teams, drama classes, or theater troupes this person would be considered the most valuable player. And in the big leagues of acting their quality may even be recognized with a prestigious academy award. In Tantra Theater however, MVP stands for Most Vulnerable Player and we recognize them with the perpetual Golden Lingam Award. In Spring of 09 it was gifted to Janos Novak for building props and getting naked onstage, In Winter of 09 it went to Sara Murray Novak for painting backdrops and now, in Spring of 2010 it goes to…Michael McClure AKA Eco-Elf. 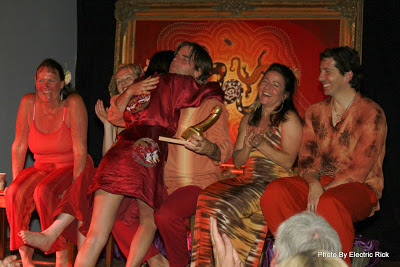 I know, I know, he’s my husband. And as the director of Tantra Theater, I was reluctant to bestow this high honor on someone that I’m sleeping with. I didn’t want to cause mutiny amongst the cast, but I’m sure they would all agree that he has produced more new material than everyone else put together. As a budding environmental comedian, he created over 15 minutes for the April show, another 20 minutes for earth day and a brand new 5 minute piece for the Shamanic Storytelling showcase. Not to mention, he rigged the lights, loaded and unloaded the entire set into his truck, and was the patron saint in funding the April show. Thank you Michael. We love you. And your toxic comedy makes us LOL!

P.S. Can I borrow that award when your not using it? 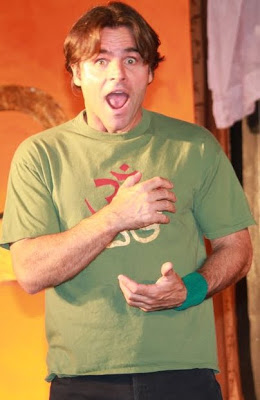 Michael McClure is Eco Elf. He is an environmentalist, father, surfer, author, actor, comedian. He wrote and performed his first stand up comedy routine at Tantra Theater in April. Even though his environmentally themed material was not tested on animals, it was tested and proven on San Diego Spiritual community, and attendees at earthday. His rant includes complaints about the FDA water regulations, the toxins in baby toys and the resistant behavior of his his over-controlling wife. His work is designed to educate, inspire and ofcourse entertain. People were falling out of their chairs laughing, and most the email feedback I got after the show was that he was the highlight.

I have to admit, I wasn’t sure how environmental comedy fit into tantra theater, and I was afraid people were going to think that I just put him in the show because I am sleeping with him. But after much mediation, I feel that environmentalism is a newest fronteer for tantrikas. Just ask Annie Sprinkle about her new passion for eco-sexual art. Tantra is not just about worshiping our own bodies as sacred, but our collective body…mamma earth. His vision is to take this routine out into the world as a creative form of environmental activism. He will be performing at green conferences and festivals. He plans to develop a website www.ecoelf.com Feel free to contact him if you have any further questions or comments about his work.

The Novaks are Tantra Theater’s secret weapon.
Since the inception of the show Sarah has built backdrops, consulted on costumes, supported the performers and most recently did body painting at the launch party. Last year she won the prestigious golden lingam award, which is essentially our parody version of the academy award, given each season to the “most valuable player.”

The tradition began when her husband Janos crafted the sculpture (after his own anatomy) and used it in his famous personal narrative entitled, “I’m not gay.” Janos also rigged the lighting, graced our stage with the full Monty during an religiously controversial re-birthing scene and ultimately crucified himself on an 8 foot wooden cross.

Admittedly it is not always easy to be in relationship with another artist while collaborating on radical experimental art, but these two are admirable in their willingness to do the deep work, and they are an artistic force to be reckoned with. Sarah created a 4×6 foot painting set to fit the famous golden frame that Janos donated last year. The set piece was custom made for our Shamanic Storytelling Showcase and now graces my livingroom. Thank You Sarah & Janos!

Kamala Devi has been collaborating with Zental AKA Freddy Weaver since she first saw and was inspired by his show in 2008. Zental is the co-founder of Tantra Nova Institute in Chicago. He comes to San Diego annually and performs his brillant one man show: Tantra Nova Man and also co-facilitates a transformativeTantra theater intensive with Kamala Devi. Below is a hillarious clip from his one man show: TantraNova Man.

To purchase the full show please go to http://www.tantranova.com

These photos are from before and after the show when we did Tantra Theater improv and a powerful Q and A session! “So Zental, what advice do you have for the blocked artist or tantrika who wants to leave their corporate job and persue their real passion?” “Start practicing your craft!”

Scroll back to top